Organisations that go that extra mile to prevent suicide should be recognised. Suicide Prevention is an area that we feel should be highest priority across our communities and the health and social care sector at all levels. We also feel that when an organisation has gone that extra mile to help communities become Suicide Safer, such an organisation should be recognised for its hard work and dedication to reducing suicidal behaviours.

On the 18th December 2013, the Chief Executive of Trident Reach the People Charity was presented with the very first SOS Suicide Safer Community Award by Common Unity Social Enterprise and our suicide prevention partner organisation, Forward For Life.

The award was given in recognition of the fact that Trident Reach has actively embraced the suicide prevention agenda at an operational level and strategic level both within their own organisation through staff engagement with safeTALK and ASIST courses and through being an active member of the Birmingham SOS Strategic Think Tank which is currently developing a suicide prevention strategy to be tabled in Birmingham next year.

At Common Unity and Forward for Life we believe there is one solution we can promote alongside the SOS programme in realising Suicide Safer Communities and it’s a very simple one. The safeTALK course can train up to 30 people in half a day – this training serves as gatekeeper to individuals who are considering suicide. We believe that through greater engagement in safeTALK at an organisational and community level, people can be directed to the appropriate support with the outcome of saving a life.

The challenge is this – safeTALK trained individuals are expected to refer people at risk of suicide to ready, willing and able individuals who can implement Suicide First Aid Support (ASIST) through an agreed safety plan – however, organisations who have staff trained in ASIST are limited in number across the region and therefore continued support could be compromised due to a lack of ready access to ASIST trained individuals. 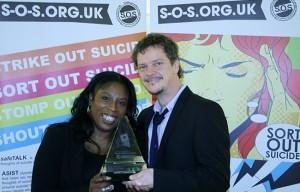 sees a way through this via brokering agreements with a range of stakeholders to sign up to engaging in safeTALK at a proportional level. This will provide the eyes and ears for every organisation to intervene where suicide ideation is a possible consideration. In addition to this, organisations can engage with ASIST – Common Unity and Forward for Life believe that through proportional representation both within organisations and community groups stakeholders will have both the gatekeeping aspect (safeTALK) and the Suicide First Aid (ASIST) embedded.

Common Unity and Forward for Life realise that austerity measures mean that investment in training is difficult to raise. However, with the relatively low costs for implementation of safeTALK and the comparatively low costs of ASIST through our training, the overall financial impact in comparison to the relevant gains is absolutely minimal when we consider that the cost of each and every suicide is in the region of £1,450,000 per death by suicide.

We are a not-for-profit organisation with a clear organisational mandate for active social investment going above expectation to ensure we are a recognised “can do” organisation. Our business has social objectives meaning we reinvest for the benefit of the communities we engage with including free/minimum cost training, project development and wider programme support. Common Unity provides services with social aims and ensures social ownership through both formal and informal participation with a range of stakeholders including users, community groups and employees. Through being a small social enterprise and through the use of highly skilled associate links, we are able to keep our overall management, internal staffing and administrative costs to a fair minimum whilst also ensuring the highest quality of delivery across communities.